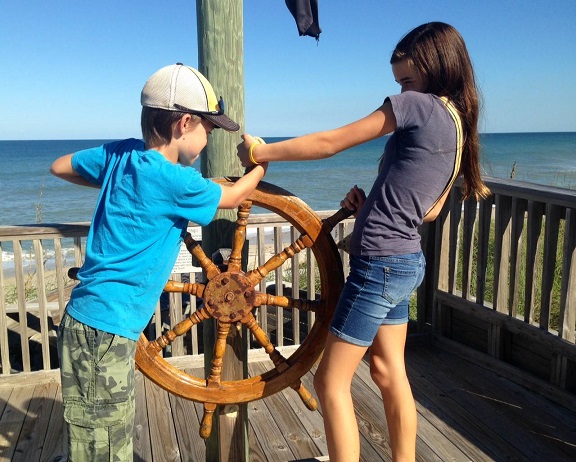 Gold was within our reach. But we walked away empty-handed.

To some, that would be mighty disappointing. For the grands, Kaitlyn and Connor, it was just one of the adventures we had during their visit in October.

All great excursions involve food. Right? We stopped for lunch at Capt. Hiram’s Restaurant in Sebastian, Florida. While we ate, we sat on an open deck and watched plovers and sea gulls scurry back and forth hunting down their meal.

Then we went down the street to Mel Fisher’s Treasures Museum.

After searching for 16 years, “a salvage team led by Mel Fisher recovered the mother lode of the Atocha” in 1985. The Atocha, which sank in 1622, met a similar fate as the eleven Spanish vessels that sank in 1715 in a storm near present-day Sebastian. 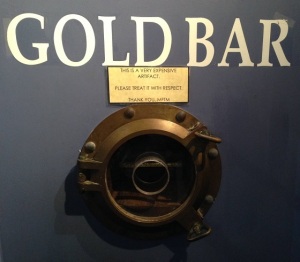 Seven hundred lives were lost and more than 14 million pesos worth of treasure went down with the eleven Spanish Galleons. No wonder this area is referred to as the Treasure Coast

It’s typical to take the sites and attractions for granted. In our role as tour guides, we discovered the many treasures close to us.

The next day, we were transported from visions of gold, silver and jewels hauled from the depths of the sea to a ride up a seven-story tower overlooking Port Canaveral on the Space Coast in Brevard County.

What is it like to navigate a boat? The “pilots” made it looks easy, but I bet it’s harder to do than parallel-parking a car.

On the fifth floor, Connor, and then Kaitlyn, safely steered their vessel via a simulator through Canaveral Harbor to greet a cruise ship. Not a dent or a scratch on either boat.

We shifted our course from the present to the past. It was all just a touch screen away.

Where did early native populations live? Where did the first European settlers land? We discovered this and more thru an interactive map.

When you enter the Exploration Tower, and when you leave, visitors are reminded of our fragile environment via the exhibit, “Embrace,” by Sayaka Ganz.

Vivid blue and white right whales, red jellyfish and stingrays can be seen from the lobby and second floor. It’s remarkable not just by its size, but from the elements used to create it. Ganz recycled items that people toss away: kitchen utensils, plastic toys and bottle caps.

From trash to treasure. That, too, is worth more than gold.

What attraction near your home do you want to see or return to?

Video clip: Wallace & Gromit’s “A Grand Day Out” – ‘We Forgot the Crackers.’ (No, we didn’t forget the crackers, but we did have a Wallace & Gromit video marathon … and we had a grand time.)  http://www.spike.com/video-clips/czwml1/wallace-gromit-a-grand-day-out-we-forgot-the-crackers

1.Main Photo: Connor and Kaitlyn outside the McLarty Treasure Museum which is part of the Sebastian Inlet State Park in Florida.

5.Photo: Exploration Tower – “Embrace” exhibit by Sayaka Ganz. She captures the movement of right whales, rays and jellies out of discarded objects such as kitchen utensils, plastic toys and bottle caps.