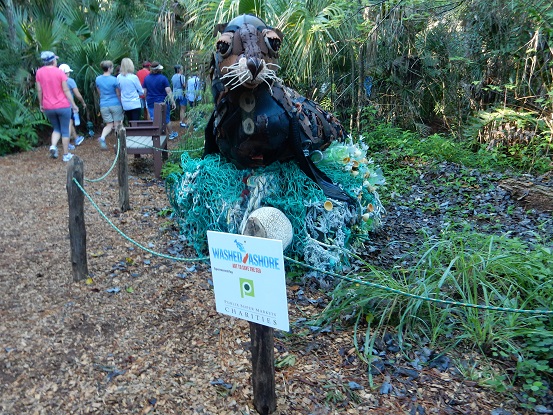 A chance to get a behind-the-scenes look – whether it’s of a movie set or some less traveled place? I’m there.

On Saturday, Dec. 12, more than 200 people joined Florida Today’s community walk at the Brevard Zoo in Viera, Florida. There are some surprising sites along the way: an alligator that lay in wait for unsuspecting visitors (fortunately, it was fake), trash turned into art to reveal the damage done to nature by litter, and a 17-foot giraffe peering at us from a window in the barn.

Natasha the Turtle is part of the Washed Ashore Exhibit. It is an amazing art piece made up of discarded water bottles, plastic lighters, shotgun shells and much more debris that was collected from area waterways.

The exhibit is to alert the public that this trash is a hazard to sea turtles, and other wildlife along the shore. Turtles, for example, mistake plastic bags for jelly fish that are part of their diet.

As we are leaving, I spotted a dragon climbing over the fence. Apparently, it is trying to escape.

Then, in the zoo’s barn areas, a curious giraffe casts a watchful eye on the humans passing thru. 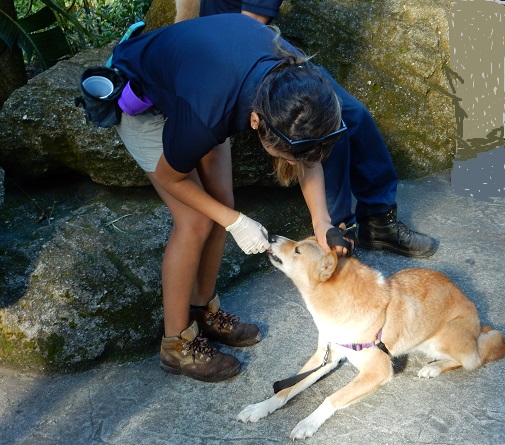 After this point, I part ways with the tour to take photos at the zoo.

Just before the meerkat exhibit, I see zookeepers holding onto two of the zoo’s dingoes (wild dogs native to Australia). The dingoes are quite civilized, as they pose for photos with members of the Jaguar Society.

Around the corner, a cheetah stares off in the distance. The attraction? Possibly a tantalizing whiff of nearby prey. (The cheetahs have a larger area to run in other than this enclosure that visitors see.)

The rhinos are not in their usual space. They take their time ambling thru the area typically inhabited by giraffes and a Stanley crane. Once they leave, the Stanley Crane – who thinks he’s a human – runs with one of the zookeepers. 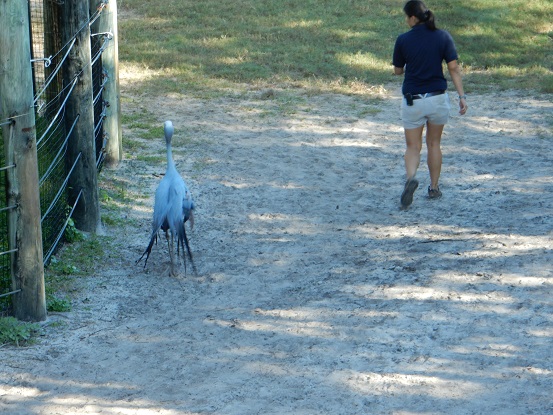 I continue my vigil, waiting for the giraffes at an overlook of lemur island. The lemurs scamper about and a few boldly stare back at us. Just who is observing who?

The giraffes are not on the horizon for at least another half-hour. A volunteer explains that the giraffes are very protective – and less social – since the birth of a baby giraffe about two weeks ago. Then two giraffes round the corner much to the delight of their fans. 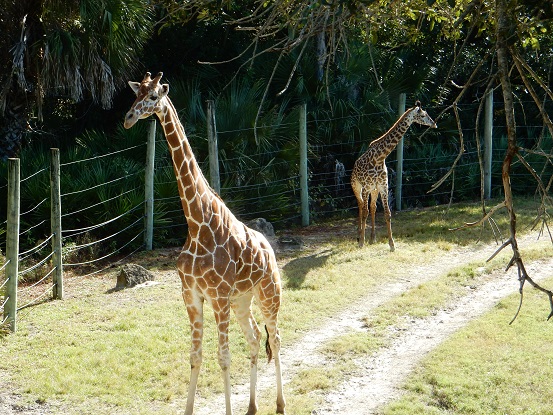 Music Video: “At the Zoo” by Simon and Garfunkel (first released as a single in 1967).  They got a few things wrong about the animals’ personalities, but it’s still a fun tune. https://www.youtube.com/watch?v=-0uO5RKI-S8