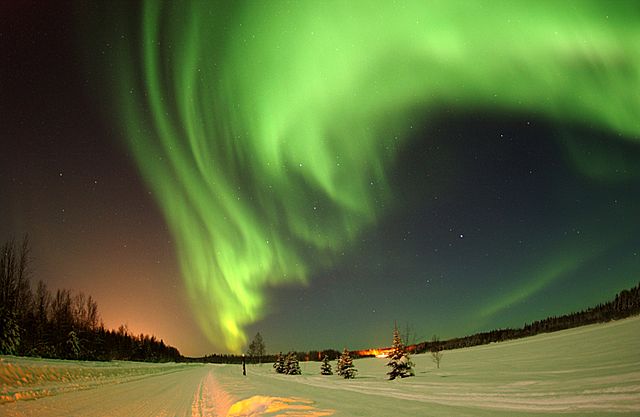 An eerie greenish light filled the skies during our visit to Fairbanks, Alaska. The Northern Lights looks like Walt Disney dumped his paint box from the sky.

One night, upon request, the hotel staff woke my hubby and me up to tell us that the Northern Lights (their scientific name: aurora borealis) was on display. Despite the frigid temps, we hurriedly got dressed and rushed outside.

We weren’t alone as we scanned the skies above our hotel, which was along the Chena River. A greenish hue danced overhead and off to the side. The light show entertained us for about 20 minutes and then it faded from view.

The Northern Lights also has caught the attention of astronauts on the International Space Station. Over a six-week period, they plan to take images of the aurora borealis from orbit.

AuroraMAX project manager Mike Greffen, with the University of Calgary’s astronomy department, is excited about the public outreach aspect of this project, according to a story in the Calgary Herald.

“The idea that we have a camera that is not only useful for scientific purposes, but that people from all across the world can go and log on, and see the state of the northern lights. That’s pretty phenomenal,” Greffen said.

“From a scientific perspective, the images will help with a better understanding of the ionosphere.”

The aurora borealis is described this way: “An intense solar system provides the energy for the light display. These moving bands of color extend from 40 to several hundred miles high. Like neon lights, auroras brighten the night when certain gases are exposed to electrical charges from the sun.”

It also can play havoc with our electrical power and satellites in space, according to “Everyday Mysteries,” fun science facts from the Library of Congress.

“The earliest known account of northern lights appears to be from a Babylonian clay tablet from observations made by the official astronomers of King Nebuchadnezzar II, 568/567 B.C.,” states “Everyday Mysteries.”

The legends surrounding the sightings have struck fear into the hearts of some ancient cultures. For me, I was confused the first time my Mom showed me the Northern Lights.

“How can she see the Northern Lights from here?” I thought as we stood outside our home in North Syracuse, N.Y. Despite working on my Astronomy badge for Girl Scouts at the time, I thought she was referring to a mall by the same name about three miles from our home. Imagine my chagrin when I finally made the connection.

Years later, that first sighting was my motivation for making the trek to Alaska many Marches ago. The Northern Lights is visible most nights of the year in Alaska or Greenland. But the best time for viewing in Alaska is late-fall to early-spring.

Calgary Herald story on the astronauts aboard the Space Station to take photos of the Northern Lights from above: