The move to my second apartment is soon followed by a fire, a hole in the wall, and living in the shadows.

Moving from one furnished apartment to another, the only thing I need to move is my personal stuff.

That’s tricky, given as I don’t have a driver’s license. Neither does my friend, Tommy, or his girlfriend, Sharon, who are helping me move.

My new place is nearly a mile away. Oh, to have the mobility of the bikers pictured above. We do have wheels – a cart to move my TV, and a wagon to hold my stereo and other items.

It’s fall. The weather’s cool. We’re pushing and pulling the cart and wagon down several blocks. All we can do is laugh, knowing how ridiculous we must look to passing motorists.

My three-room apartment is on the second floor. It’s in a quiet neighborhood with a little grocery store on the corner and a park nearby where I can walk my French poodle, Paris. Tommy will again be my downstairs neighbor.

There are two apartments on my floor. The other one is empty, and that becomes a problem.

One night, friends stop by where I’m working at my second job at Grant’s department store to tell me that there was a fire at my apartment. Paris is fine. 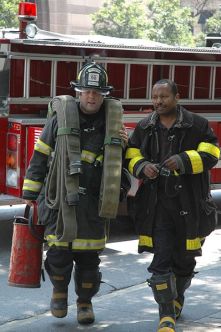 After work, I return to the apartment. Firefighters had to chop a huge hole in the wall between the two apartments to get to the fire.

What caused it? It was accidental. The landlord’s son had a party in the empty apartment, and they forgot to unplug the space heater which started the fire.

Other than the gaping hole, there’s very little damage inside my apartment. The gas stove works. So does the fridge. But there’s no electricity.

Despite that, I decide to stay. It’s the first time since I’ve moved into the city that I feel safe. If anything happens, Tommy’s just downstairs. His girlfriend, Sharon, and her parents live just a little ways down the street.

For a month, I am just a shadow. It’s late when I come home from my second job. I see few people as I come and go.

By the time my apartment is fixed up, I’m soon on the move again. This time, it’s just downstairs. Tommy and Sharon are getting married, and he’s moving out.

Finally, calm after a stormy beginning with my first apartment. Peace at last.

Photo: Moving – by bike. Bicyclists in Portland, Ore., brave the rain to help each other move by bike. Taken Feb. 2, 2008, by Axcordion http://commons.wikimedia.org/wiki/File:Moving_by_bike.jpg