I thought of that as Dave and I recently celebrated our wedding anniversary. On one trip years ago, we had such a good time that we were really sad when we had to pack up and return home. On another, I felt as if we were hustled onto a runaway train straddling rickety rails and our luggage thrown on as an afterthought.

The difference between the two? The service when dining out.

We were in Montreal once before and the service, the people, and the experience was fantastic. But, on this trip … well, maybe it was something in the water.

We’d hoofed around the city, doing the tourist thing. As it got closer to dinnertime, we checked our guidebook for a good restaurant in the area.

Struck out on our first choice. The maitre d’, who reminded me of the snooty waiter in “Ferris Bueller’s Day Off,” told us they were booked. I looked around the restaurant. It was still early. The tables were empty.

Maybe, their customers were all just around the corner, getting out of their limos, and about to rush the restaurant.

We walked a bit more and found another place that had a good rating in the guidebook. It didn’t mention a dress code. Nor were reservations required.

The maitre d’ at the second restaurant eyed us disdainfully when we said we didn’t have a reservation. He sniffed as he ushered us to a corner table and said we had to be done by 7 p.m. It was 5:30.

We should have taken the cue and left. But our hunger outweighed our good sense. When we got the menu … trouble.

It wasn’t in English and there were no prices next to the food. I have no idea what we ordered for dinner as we ate with one eye on the clock.

We asked about dessert. The waiter glanced pointedly at his watch. No time. Not even for a leisurely cup of coffee.

The last American to get good service there was probably Princess Grace.

Franco-American relations took a brief tumble after that trip. Fortunately, we recovered our sense of humor. We lived near the U.S.-Canadian border at the time and made several more trips there that were delightful. That helped put that distasteful experience in our rearview mirror. 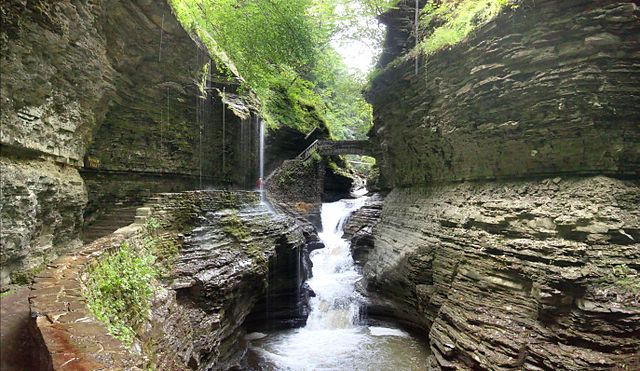 About a year later, we were headed to Watkins Glen State Park. We stopped at the Showboat Restaurant on Seneca Lake.

At the restaurant, the bartender discovered it was our anniversary. After a teensy bit of prodding, he found we loved Boston cream pie.

A short while later, the bartender (and part-owner, Larry Jenkins) emerged from the kitchen. He had a slice of that cake and the candle on top was lit. Then he encouraged the rest of those dining and drinking there to join him in singing us a song to celebrate our special day.

Little did he realize, he had me at the cake. That small, sweet gesture was just the right touch. My husband and I sat around eating, chatting and swapping stories with the other customers.

The next morning, there was no question where we’d go for breakfast. We headed back to the Showboat Restaurant and made some new friends and great memories while we were there.

One gracious gesture built good will, and a sweet memory that I replay again and again.

This post marks the first anniversary of my blog. A special thanks to my husband, Dave, for editing my posts. Thank you to all who have left thoughtful and/or funny comments, who “follow” me, and who have given me your support and encouragement.

Judy Berman and earthrider, 2011-16. Unauthorized use and/or duplication of this material without express and written permission from this blog's author and/or owner is strictly prohibited. Excerpts and links may be used, provided that full and clear credit is given to (Judy Berman) and (earthrider, earth-rider.com, or earthriderdotcom) with appropriate and specific direction to the original content.
Loading Comments...
Comment
×
<span>%d</span> bloggers like this: