An Army post dating back to the 1700s served a peaceful and humanitarian purpose during the last two years of its life. But few knew of the role that Fort Ontario in Oswego, New York, played in sheltering refugees.

The fort became the only refugee center in America during World War II. It was a safe haven for nearly 1,000 men, women and children fleeing Hitler’s march across Europe. Of 3,000 who applied, just 982 refugees (874 were Jews, the rest were Christian) from 18 different countries were offered shelter at the fort.

Ray Harding was 8 years old when he and his family first came to America in 1944. They were Yugoslavian refugees who had been in a concentration camp in Italy that was liberated by the British. He viewed his 18-month stay at Fort Ontario as idyllic.

“The shelter in Oswego represented hope. It was a haven, a new life in the United States, a hand being reached across the sea by the United States,” Harding told me in an interview when I was a reporter at WHEN-AM radio in Syracuse, N.Y. (Born Branko Hochwald, Harding became a Liberal Party power broker in New York. He died in August 2012.)

President Franklin Delano Roosevelt’s decision to provide a safe haven changed not only the lives of the refugees who stayed there, but also the small community they lived in during the remainder of the war.

Aug. 5 marked the 69th anniversary of the fort’s role in the refugee relocation during WWII. Even though I lived about 35 miles from Oswego, I was never aware of its link to history until shortly before I did these interviews.

Manya Breuer, who survived five concentration camps, told me the fort was a welcome relief from her family’s life on the run.

“It was the beginning of a new life. It was coming from Hell into Heaven,” she said, referring to what is now called the Safe Haven.

But she felt guilty being among those selected.

“Here I was from so many, many people chosen to come to the United States, and beginning a new life again. When I think about it, it hurts me. Why is it that the rest didn’t have a chance?” she said.

Not all, initially, felt this way. “They were greatly disturbed by the chain-link fence with barbed wire on top and military police at the gate,” said Dr. Willard Schum, founding president and board member of the Safe Haven Museum and Education Center.

Ruth Gruber, who worked with the U.S. Secretary of Interior to help the refugees relocate, told them that all army installations had fences.

“(Some) didn’t believe me, and they were really terrified. It brought back all the memories of everything they’d escaped from. But others saw the fence as safety.”

Gruber said the schools in Oswego welcomed those in the shelter. Some of the children had never been to school.

“There was a 15-year-old girl from Germany who had been running since 1933. The day she went to school, she said: ‘I never believed in my life that I would go to school, that I would sit in a classroom.’” The girl grew up to be an artist.

Oswego residents did open their heart to the new arrivals. They brought the refugees food and clothing, and passed it over the fence. A former city mayor, Bill Cahill, remembered biking to the shelter and bringing candy to the refugees.

Housing and education were easy to resolve. Another concern was where they would go once the war ended. That was settled after the war came to an end. They were permitted to become American citizens. 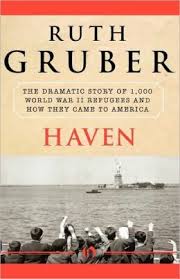 Dr. Schum said he wished more could have found asylum in the United States during WWII. But there were ships that were turned away that had Jewish refugees aboard. They were not allowed to land.

He noted that of the roughly 1,000 people at the refugee center, there were doctors and lawyers who made their mark in this country. One scientist helped develop the CAT scan, another worked dismantling atomic weapons in Russia for the American government.

“What could we have done if we had opened our gates to more,” Dr. Schum said in a video made by The Post-Standard in Syracuse, N.Y. (Link below)

Many hope that the Safe Haven will remind people what the refugees went thru before they came to America’s shores, and that this tragedy will never be repeated.

Sad to say … it has. Genocide has taken place in many countries and regions, including: Rwanda, Bosnia, Uganda, Darfur and Syria.

Video: Ruth Gruber was a woman of firsts. This fascinating short film (7 minutes) includes the nearly 1,000 refugees who she helped relocate at Fort Ontario, Oswego, New York. She will be 102 on Sept. 30, 2013. http://www.aheadoftimethemovie.com/trailer.html