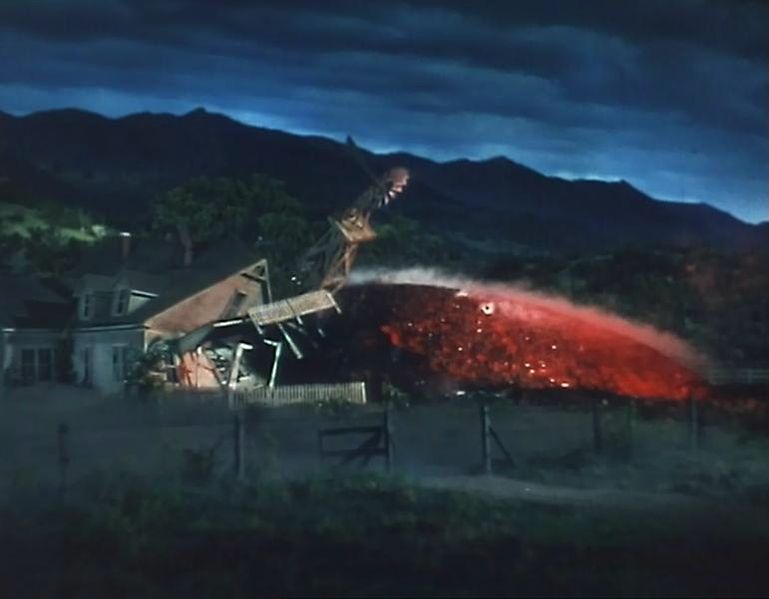 It was the night before Halloween. A play on the radio rattled listeners and made headlines around the nation.

My Mom, who was 16 then, listened intently to the 1938 radio broadcast on Orson Welles’ Mercury Theater on the Air. The program on the Columbia Broadcasting System began at 8 p.m.

There were frequent interruptions. Among the first was a bulletin announcing that a huge shock “of almost earthquake intensity” happened near Princeton, New Jersey.

Orson Welles, who played astronomer Professor Richard Pierson at Princeton Observatory, speculated that it might be a meteorite.

The next break in the programming was another bulletin – more alarming than the first.

“It is reported that, at 8:50 p.m., a huge, flaming object, believed to be a meteorite, fell on a farm in the neighborhood of Grovers Hill, New Jersey, 22 miles from Trenton.”

My brother, Hank, and I grew up on these stories. Mom told us about the reactions to the broadcast that night on October 30th. She said what followed shocked many around the nation. People were in fear and panicking. They were calling police trying to find out what was going on.

What they were hearing on the radio was Welles’ adaptation of H. G. Wells, “War of the Worlds,” about an invasion by Martians on Earth. Many mistook it for the real thing.

Those who began listening after it began missed time references that leaped 2 hours in the play during a span of 30 minutes in real time.

Professor Pierson (Welles): “It’s estimated that, in the last 2 hours, that 3 million people have moved out along the roads to the north … communication with Jersey Shore was closed 10 minutes ago. No more defense. Our Army is wiped out … This may be the last broadcast. We’ll stay here to the end.”

As someone who grew up listening to old-time radio shows like Orson Welles on “The Shadow Knows,” it’s easy for me to see how people were so riveted to their radios and taken in by the “news bulletins.”

“They rise like a line of new towers on the city’s west side,” Professor Pierson (Welles) says of the aliens who he says are crossing the river.

Then, in a dramatic gasp, just before the “professor” collapses, he tells listeners that the aliens are “100 yards away.”

Not buying the metal hands of the robotic intruders?

We’d like to think that people today are savvier. Perhaps, they’d start Googling Snopes, or some other rumor-checking website, to see if it was true. We might not be taken in by a “Mars invasion,” but many of us today have been duped in other ways via the electronic and social media.

About 39 minutes into the program, the station broke in for the first time. Orson Welles announced that this was a Mercury on the Air broadcast of “War of the Worlds.”

“I’m obsessed by the thought that I may be the last living man on Earth,” the professor states matter-of-factly.

At this point, I’m sure the listeners were looking around the room at each other and scratching their heads, saying … “Wait a minute.”

At the end, Orson Welles offers an apology of sorts. He told listeners that this was a holiday offering. It was Mercury Theater’s “own radio version of dressing up in a sheet and jumping out of a bush and saying ‘Boo!’ ”

“We couldn’t soap all your windows and steal all of your garden gates by tomorrow night. So we did the best next thing: We annihilated the world before your very ears and utterly destroyed CBS. You’ll be relieved, I hope, to learn that we didn’t mean it and that both institutions are still open for business.”

He closed with this cautionary tale: “Remember … the terrible lesson you learned tonight. That grinning, glowing, globular invader of your living room is an inhabitant of the pumpkin patch. If your doorbell rings and nobody’s there … that was no Martian. It’s Halloween.”

And all you have to fear is running out of treats and the pranksters who love to play tricks. Boo!

Radio broadcast – The War of the Worlds was an episode of the American radio drama anthology series Mercury Theatre on the Air. It was performed as a Halloween episode of the series on October 30, 1938, and aired over the Columbia Broadcasting System radio network. Directed and narrated by actor and future filmmaker Orson Welles, the episode was an adaptation of H. G. Wells’s novel “The War of the Worlds.”  http://www.youtube.com/watch?v=W6YNHq1qc44

Illustration: War of the Worlds – tripod – Alien tripod illustration by Alvim Corréa, from the 1906 French edition of H.G. Wells’ “War of the Worlds”. http://upload.wikimedia.org/wikipedia/commons/5/5a/War-of-the-worlds-tripod.jpg