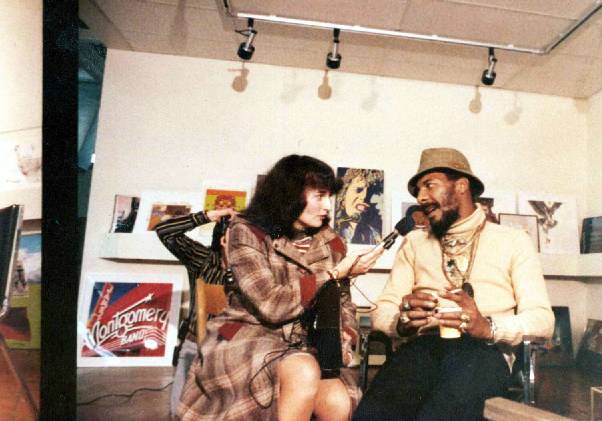 Irreverent, hysterical, saying out loud what most of us only think.

I’d tune in late at night as a teen, and listen to these bad boys of radio, wondering what it would be like to work with them.

Years later, I found out. These disc jockeys were just as crazy in person as they were on air.

I was still in community college when he hired me to do an early-morning on-air Sunday news shift.

This was a time when most good little rock ‘n’ rollers were safely asleep in bed.

Unfortunately, the general manager was not.

I had never broadcast live before. At best, my delivery was shaky. My career was almost over before it began.

Ron lobbied for me to stay on to do one of the taped public-affairs programs. His confidence in me spurred me on. I couldn’t match his booming, on-air delivery. But I learned a lot from his writing, his humor and his patience.

One lesson was to really “listen” during an interview. The subjects ranged from Bill Kaysing, considered to be the father of the moon hoax, who wrote the book, “We Never Went to the Moon,” to more controversial subjects like nuclear power.

After co-worker Sandi Tams Mulconry and I taped our separate interviews – the pro and con on the subject – in the studio, I sat there pleased with myself. I had done my homework.

But, to my chagrin, when I listened back, I found the interviewees had neatly tap-danced around the situation. They never answered the question.

Also, I should take my own advice. One night, as snow pummeled the area, I was advising listeners to get off the road and stay home. The irony wasn’t lost on me. Minutes later, I headed for my car.

I got stuck in a snow bank before I even left the station’s driveway. Passing motorists stopped to push me out. Closer to home, I got stuck again. Again, someone stopped to help.

That commute – typically 10 minutes – turned into a two-hour ordeal before I got home. But I made it in time to make our daughter tacos for her 6th birthday and to celebrate her big day.

The hours were long. But, hey, I got to interview folk singer Richie Havens, golfer Arnie Palmer, former Secretary of State Henry Kissinger, and met some of the pop singers of the day. Heady stuff.

Another bonus? Being accepted by the merry pranksters at the station.

Sure, I was a target for their pranks. But it was all in fun. I’d look out from the news department and see that DJ Charlie Brown was talking to me from his on-air booth. I’d frantically turn the dials, trying to open up the sound to hear him.

When he started laughing, I realized he had been lip-synching. I’d been had. OK, game on, my friend.

Listeners at home had no idea what was going on. When I broke out laughing during a newscast, you can bet there was mischief afoot.

But their gags were mild compared with some stunts that I’ve heard were pulled elsewhere.

It was high school all over again, and it was a lot of fun.

There are many I worked with at WOLF that I’d like to thank for their support and guidance. I couldn’t have made it thru that first year without: Ron Bee, Rick Gary, the late Jim Sims, Peter King, Carol St. John, Sandi Tams Mulconry, John Gabriel and Rick Charles. I apologize if I’ve left anyone out.