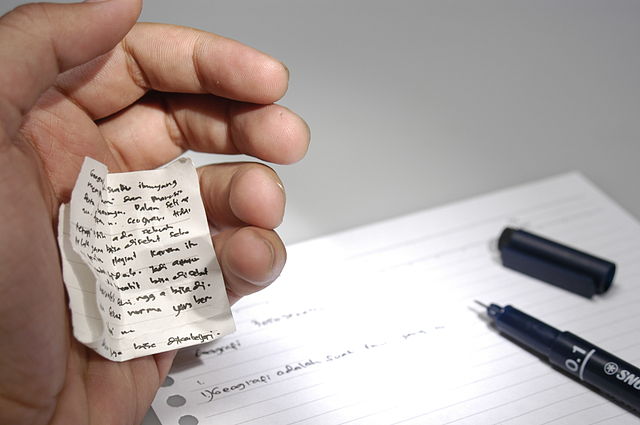 Plans imperfectly conceived and carelessly executed. That’s usually the downfall of those who decide to cheat.

Cheating comes in all forms. The kind that leads to broken hearts or empty bank accounts. Or, in this case, the type related to academic shortcuts.

I confess. When I was in high school, I did some book reports for a boy in my class because I liked his brother.

His teacher knew something was odd. Suspicion was that he didn’t know where the library was in our two-story, smallish building.

He was caught. End of caper.

Some might dismissively write this off as a childish prank. But it’s not funny if you’ve ever had your work ripped off, and someone else took the credit for it.

In 11 years of teaching, I’ve stumbled on some lackluster schemes and foiled the culprits. No doubt, I’ve missed more than a few.

There are missteps to avoid, for those like Maynard G. Krebs, who cringe any time they hear the word “work.”

My first year of teaching a student handed in his report about hurricanes. I was really blown away (pun intended) by his phrasing and observations about the storm.

“Rory’s” group was one of the ones that used a poster board for their presentation and posted his essay on the board, despite me encouraging them NOT to.

One day, Rory and his teammates rushed into my room and began routing thru the trash. He told me they were looking for his essay.

Later, as I’m grading the essays that were turned in, I realized that one of them looked awfully familiar. Turns out, I was right. It was Rory’s.

Another student liked it so much that she tried to pass it off as her own. When quizzed about it, she didn’t deny it.

Other situations require the suave skills of a Sherlock Holmes.

For one project, students were to write a five-page journal about a country they “visited.” The writing was supposed to be based on research they’d done over a few weeks.

One student’s writing was very impressive – too much so. The vocabulary was definitely higher than middle school level. I did a quick Google search, and found that she had taken her “experiences” directly off a blog. Word for word.

When you try to pass someone else’s work off as your own, that’s plagiarism. Students are warned not to do it.

When I called the Mom, Mom insisted her daughter did the report on her own.

I told the Mom that I had the blog up on the screen, and offered to read it to her. She declined. The student had to re-do the project.

Some suggestions on how to avoid getting caught when you cheat:

OK, I left out a few tips. Also, at some schools, teachers have access to a program that quickly detects plagiarism.

The downside is: If the lesson is not learned early, the consequences for those caught can range from failing a grade, being kicked out of college or fired from a job.

What cheating scam – business, school or life – ticks you off?

Music Video: “Baby It’s You” by The Shirelles (1961). This might seem an odd choice, but the lyrics … ‘cheat, cheat’ … were calling me. https://www.youtube.com/watch?v=8clnxViHdp8