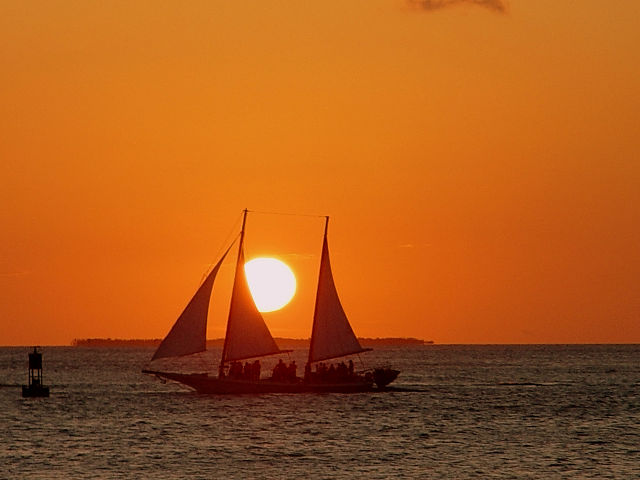 Salty ocean spray flew up as our glass-bottom boat sped toward its destination – a coral reef in Key Largo.

Just the island’s name conjures celluloid images of Humphrey Bogart, Lauren Bacall and tough guy Edward G. Robinson in the 1948 movie, “Key Largo.” They run thru my mind like reels at an old movie theater as we pull away from Key Largo’s shores.

The opening scenes of the movie were shot here.

A relic from another Bogart film, “The African Queen,” also can be found here. That boat was used in the 1951 film that stars Bogart and Katherine Hepburn. That boat was restored in 2012 to serve as a tourist boat, several years after our visit.

After lunch, we headed to Key West. This is a nine-hour drive from our home, but getting here – well worth the view. 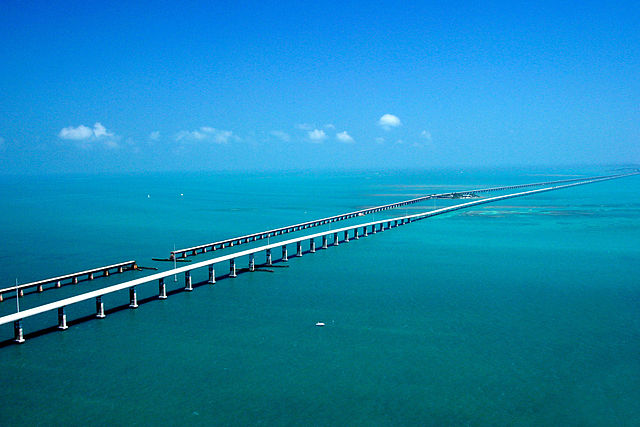 The Seven-Mile Bridge, one of the longest in the world, offers breathtaking views along stretches of turquoise water. Clear, striking shades of blue from the ocean on our left, and the Florida Bay and the Gulf of Mexico on our right.

Our hotel, the Almond Tree Inn, was conveniently located near the corner of the renowned and infamous Duval Street in Old Town Key West. We headed down to Mallory Square to see the sunsets.

On our way, a drunk staggered out of a bar exposing his shortcomings for all to see. Yes, this was our first exposure to the “wild life” there – and it was still early in the day. 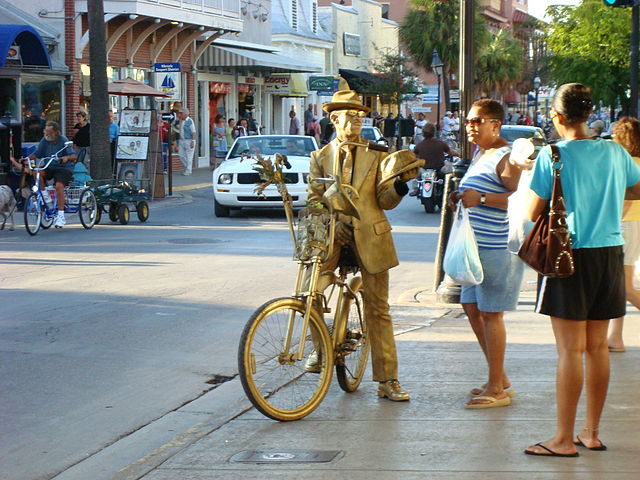 A huge crowd gathered at the edge of the southernmost city in the continental U.S. to see the sun set. Street performers – jugglers who tossed flaming torches in the air, acrobats dancing along a high wire, and a dog jumping thru a hoop – were on hand before and after that magic moment.

The Key’s most famous writer, Ernest Hemingway, lived here with his wife Pauline from 1931 until the end of their marriage in 1940. He wrote several of his most celebrated books at his pool house office out back of his historic home at 907 Whitehead St.

Our guide, Joe, told us that, when Pauline remodeled the home, she replaced the ceiling fans with ornate chandeliers.

“During the summer, we think about her EVERY DAY,” he drawled for emphasis. Floor fans cooled the room this March day of our visit several years ago.

Outside, Joe showed us a pool that Pauline had installed for $20,000 during the Great Depression. When Hemingway returned from an overseas venture, he took a penny from his pocket and told Pauline she might as well take his “last red cent.”

Pauline did. She had it set in the cement next to the pool. 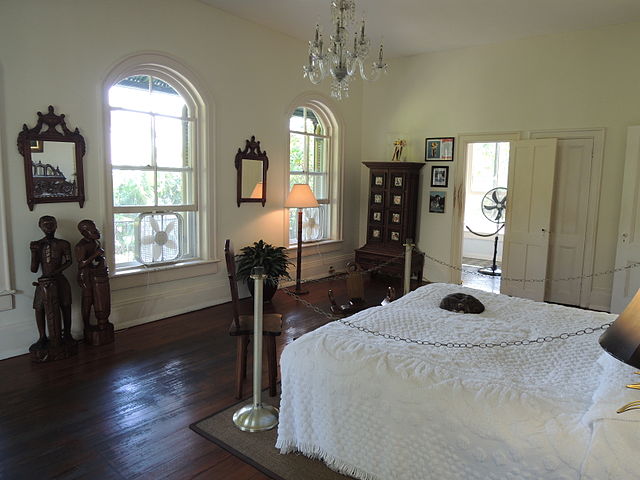 There were 49 cats living on the property. Many have six toes and are descendants of “Papa” Hemingway’s six-toed cats.

One of “Papa” Hemingway’s favorite hangouts was Blue Heaven at 729   Thomas Street. While we ate lunch there, roosters, chickens, chicks and cats wandered around the open-air restaurant.

There’s a photo of him there when it had a boxing ring. At various times, the place was “a bordello, a pool hall, a railroad water tower, a cockfighting arena, a boxing ring and ice-cream parlor.” And, now, a popular restaurant.

If you wander over to the Southernmost Point (of the continental U.S., at the corner of Whitehead and South streets), Cuba is about 90 miles away.

On a clear day, you might see it from your back porch. (chuckle)

A man, wearing an orange-and-white “Mile Marker O” offered to take our photo. Recalling the scene from the comedy, “European Vacation,” where the photo taker took off with the tourists’ camera, we waited to see how he handled the family ahead of us.

Like Blanche Dubois in “A Streetcar Named Desire,” we often have to depend on the kindness of strangers.

And, many, thankfully, are very accommodating.

Music video – Key West  – http://www.youtube.com/watch?v=Du4gR-_kLEs – 2012 Trop Rock Music Asociation Songwriter of the Year Nominee, Steve Tolliver, sings Key West Is The Best from his CD “Back To The Islands”.

Photo – Seven Mile Bridge – to Key West – Seeming to converge in the distance, the Seven-mile Bridge on the Florida Keys Scenic Highway west of Marathon, FL, runs parallel to the historic Flagler railroad bridge of the early 1900s with the Atlantic Ocean to the South and the Gulf of Mexico to the North. Taken March 20, 2003 http://upload.wikimedia.org/wikipedia/commons/thumb/2/2d/Looooooong_bridge.jpg/640px-Looooooong_bridge.jpg