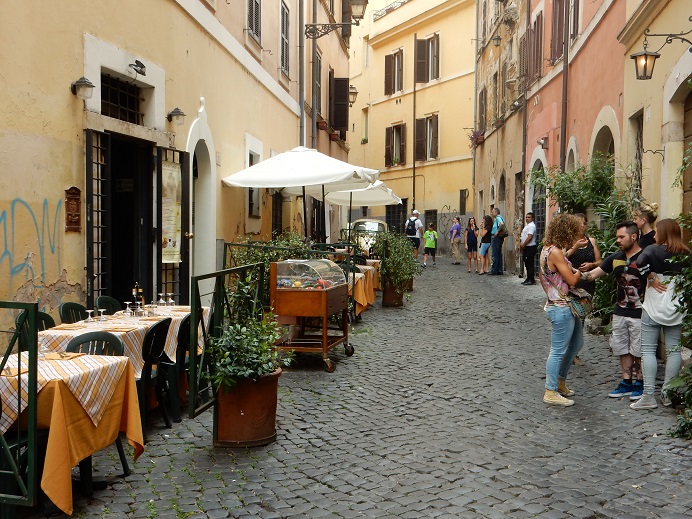 Narrow crooked cobblestone alleyways in Rome beckon you to venture around the next corner, where there could be a street festival, musicians or shops.

The enticing smells of basil, tomato sauce, cheese and freshly baked bread float out onto the streets from the restaurants. Or a gelati shop pops up right in your path, and is calling you to pause for a refreshing Italian sherbet.

The slow pace along this corridor contrasts sharply with the Vespas zipping in and out of the traffic. It’s best to walk with one eye over your shoulder to avoid a too-close-for-comfort encounter.

In early June, we stayed in Trastevere, a Rome neighborhood that’s frozen in time, or so it seems. During the day, it’s peaceful and has the right touches of the Old World. At night, it comes alive. Party-goers and others flock to its many excellent restaurants.

Thankfully, we didn’t hear any of that clamor in our hotel. Casa di Santa Francesca Romana is a former monastery, a perfect retreat.

After a complimentary breakfast at the hotel, we head out to visit the open-air museum near us. That would be Circus Maximus, the Colosseum, the Roman Forum and Palatine Hill. 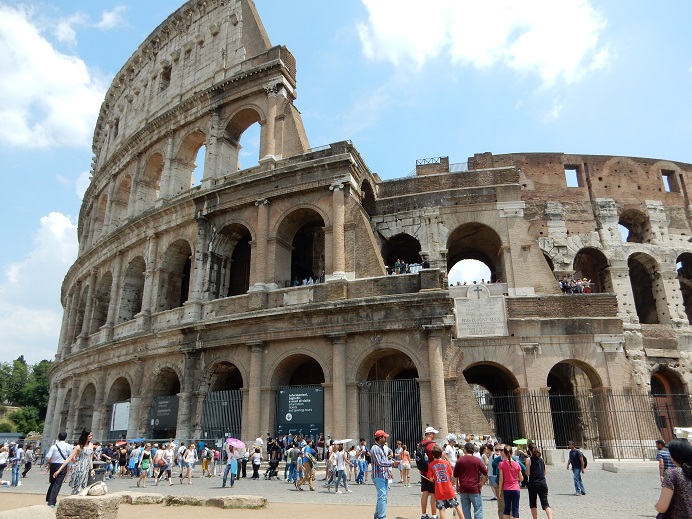 From a distance, the Colosseum might be mistaken for a multi-story garage. Completed in 80 A.D., this is the largest amphitheater ever built.  It can hold about 50,000 spectators in its giant arena. Here, gladiators fought for the right to live another day. (Some believe, however, that Christians met their fate in nearby Circus Maximus.) 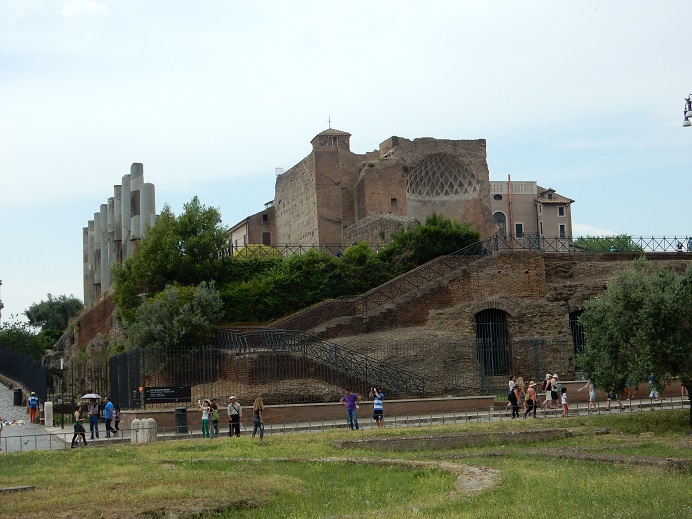 Palatine Hill was the birthplace of Rome, established about 753 B.C. by Romulus after he killed his twin, Remus, in a fit of rage. Later, it became the lavish residence for several emperors, including Augustus. It is near the Roman Forum.

The church of Santa Cecilia in Trastevere is down the road from our hotel. It was built above the Roman house of this martyr.

Santa Cecilia is the patron saint of music. When her sarcophagus was found in 1599, her body was intact. Sculptor Stefano Maderno sketched her body, and made a haunting sculpture of her out of white marble.

When in Rome, do as the Romans do. For us, the search is on for food.  (But this photo makes those of us in front look H-U-G-E.)

Back at the hotel, we relax in the hotel’s ochre-colored courtyard lined with orange trees. The staff at Casa di Santa Francesca Romana speaks several languages. Thankfully, their English is far superior to my meager Italian.

In our rooms, Dave steps into the shower fully clothed to demonstrate what a slim compartment it is. On the plus side, the hot and cold running shower is very refreshing after a long day of hiking around the Eternal City.

Hollywood has captured several icons in Rome. One is the Mouth of Truth, or Bocca della Verita, found in one of Rome’s oldest churches, Santa Maria in Cosmodin, Trestevere. It is in the movie “Roman Holiday,” with Gregory Peck and Audrey Hepburn. Legend has it that people suspected of telling lies are forced to put their hand in the mouth of this massive stone – once a common ancient street drain cover. It’s said that, if you’re lying, the teeth will clamp down on the hand and you risk losing your hand.

Trevi Fountain was built in 1732. This fountain was immortalized in the movies “Three Coins in a Fountain” and in Fellini’s “La Dolce Vita.” Sad to say, it’s under repair. So there will be no splashing about in the fountain. When it was open, it was under guard for such foolishness. While you can still toss a coin over your shoulder into the fountain, it’s just not the same with Plexiglas between you and the fountain. Legend has it that by throwing the coin in, you are assured of a return trip to Rome.

Buon viaggio! (Happy travels!) What place would you like to travel to or to revisit?

All photos – except the one in the restaurant and at Boca della Verita (the Mouth of Truth) – were taken by me: Photographer – Judy Berman

If you wish to use any part of this post or any of the photos, please ask. Copyright.

44 thoughts on “Roaming the Streets of Rome”