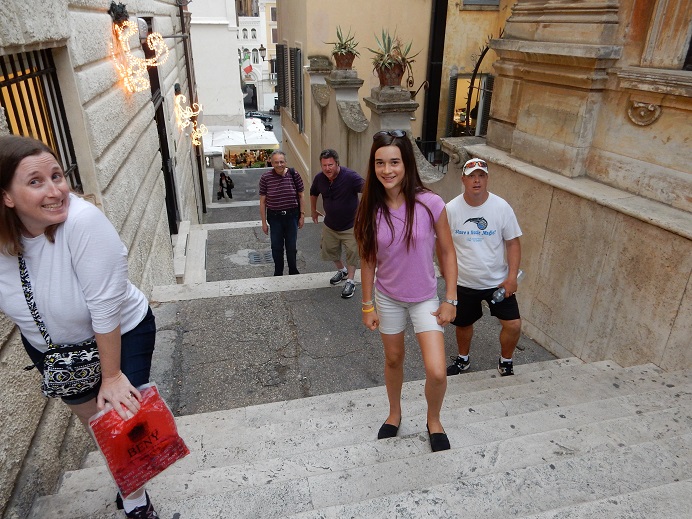 Gladiators and emperors first come to mind when I think of Rome. But, centuries later, the Eternal City also drew artists and writers – such as English Romantic poet John Keats.

Keats came to Rome to recover from consumption. He lived in a home at the foot of the Spanish Steps and also died there at the age of 25 in 1821. The Keats-Shelley Memorial House showcases his works along with Lord Byron, Percy Bysshe Shelley and many others.

The Spanish Steps, a Roman Baroque structure, were built in 1723-1725. You climb a “steep slope between the Piazza di Spagna at the base and Piazza Trinita dei Monti, dominated by the Trinita dei Monti church at the top.” (Wikipedia) The Via dei Condotti, facing the Spanish Steps, is lined with shops carrying the names of Rome’s high-end Italian fashion designers -– Prada, Valentino and Gucci.

Throngs of people and vendors crowd the steps. We avoid the hassle of threading our way to the top by taking a side street to the Spanish Steps. Two already are at the top waiting for us. (Photo above)

There are 138 steps in the Spanish Steps -–  “la scalinata” (the staircase). At the bottom is the Fontana delia Barcaccia -– the “fountain of the leaky boat” which is spouting water as it sinks.  The fountain was built in 1598 as a monument to the great flood of the river Tiber that same year. It was commissioned by Pope Urban VII and is the work of Pietro Bernini and his son, Gian Lorenzo.

The climb is worth the trip, especially if you get there just before sunset. 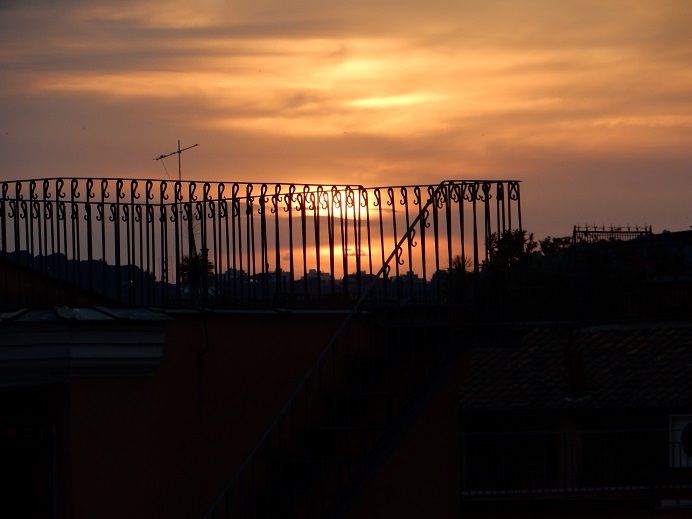 The next day, we head to the Piazza Santa Maria in Trastevere near our hotel. There’s no need to bring bottled water. Public fountains provide liquid refreshment for man and dog alike.

The piazza features many delights. We saw a man painted in silver remain motionless like a statue, and an Invisible Woman – or, at least, I think we did. 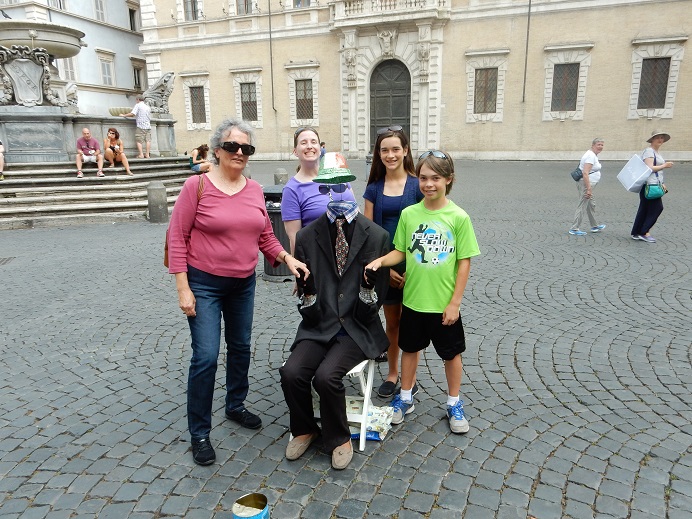 We definitely saw a marionette paint with a little help from his friend in a blue dress. (Valentina Balduzzi – il fiore e la luna). Very impressive. Occasionally, the puppet  peeked into the tin hat to see if anyone left a tip. He made his point – many did so. 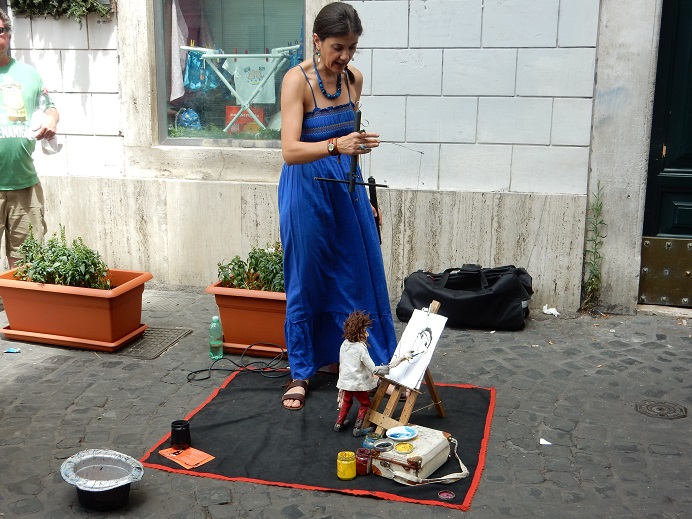 Of course, we had to refuel. For lunch, we returned to Dar Poeta. They serve both thin crust and a thick crust (alta). We got the latter, and used a fork and knife to eat it. That’s the Italian way! 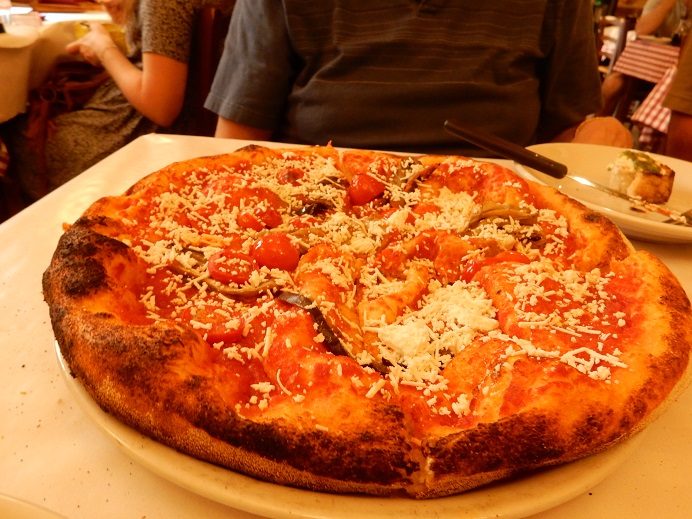 Then it was back to dodge the traffic in the narrow cobblestoned corridor from the piazza. It’s best to keep one eye out for darting Vespas and Smart Cars. 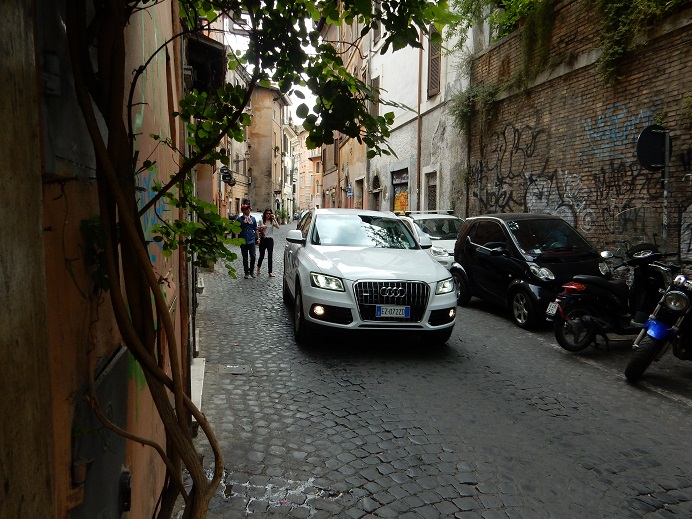 The neighborhood our hotel is in has many wonderful shops, restaurants and bakeries. Innocenti’s had some mouth-watering cookies that we just couldn’t pass up.

The area’s ochre and terra-cotta painted buildings are picturesque.

For our last night, we returned to Ristoranti I Vascellari. Our waiter brought a small bottle of Limoncello to our table. Limoncello is the generic name for an Italian citrus-based lemon liqueur that is served well-chilled in the summer months. Some consider it the national drink of Italy.

After we left, we walked over to the Tiber River. The lights are from a festival. We’d seen the white tents set up days before. Now, there were people dining along the river, buying art, and having a great time. 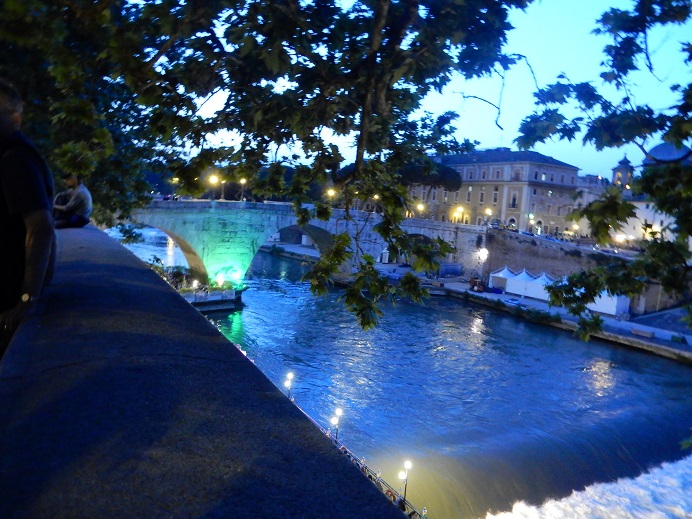 On our travels, we also visited the Vatican and Venice. I’ll posts stories about those places in coming weeks. Unless, you’re the Griswolds (Chevy Chase’s family in the movie, “European Vacation”), vacations always end too soon.

It was an amazing journey and I’d love to return to Rome and Venice. Buon viaggio! Happy travels!

What favorite spot do you want to return to?

My next post will be about our visit to The Vatican.

Part 1 of our Rome trip – Roaming the Streets of Rome – can be found here.

Copyright. Please ask for permission to use any of my photos or comments from this story. Thank you.