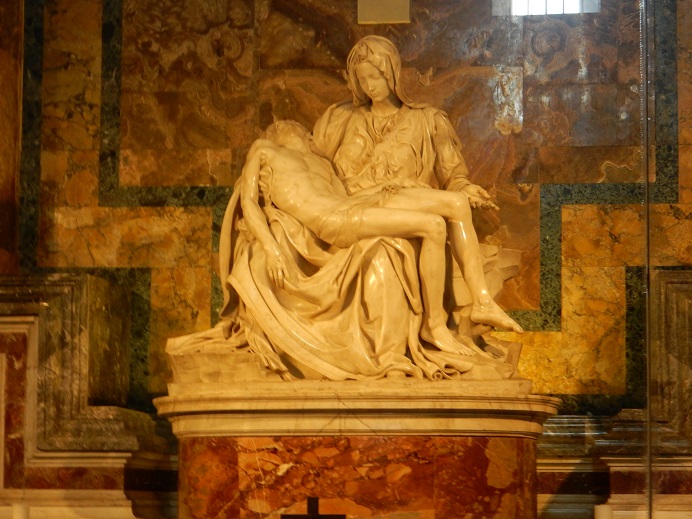 In 1972, a deranged man damaged Michelangelo’s Pieta (a statue created in 1499 of the Virgin Mary cradling Jesus’ body after he was crucified). The man dealt 15 blows to this statue, which removed Mary’s arm at the elbow, knocked off a chunk of her nose and chipped one of her eyelids. The restored statue now is protected by a bulletproof acrylic glass panel.

St. Peter’s Basilica, the world’s largest church, covers about 5.7 acres. It was built in the 4th century over the tomb of St. Peter. “Atmospheric factors, the barbarian invasions, wars, sacking and neglect during the Avignon period had reduced the basilica’s structural walls to such a precarious state that it threatened to collapse.”   Construction on the new St. Peter’s Basilica began in 1506 and was completed in 1626.

St. Peter’s Basilica and the Vatican Museum are impressive because of their history, their size and their extensive art collections that included paintings, marble statues that are 15 feet high, and antiquities from Egypt – including a 3,000-year-old mummy.

Michelangelo’s 12,000-square-foot fresco on the Sistine Chapel ceiling was the only art that was off-limits to photographers. It took Michelangelo four years to complete (1508-1512).

A golden globe sits in the courtyard outside the Vatican museum. The “Sphere Within a Sphere,” created in 1990 by Arnoldo Pomodoro, is part of a series of bronze sculptures found in prime locations throughout the world, such as the headquarters of the United Nations in New York. 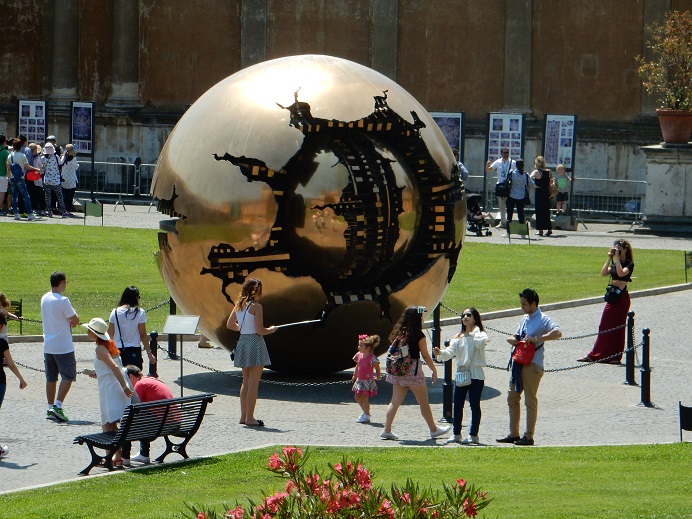 Laocoon’s statue, on display in the Vatican, was excavated in Rome in 1506. Legend has it that Laocoon and both his sons were killed by giant serpents sent by the gods. They were angry because Laocoon attempted to warn his fellow Trojans not to take the wooden horse outside the gates that the Greeks offered as a gift. 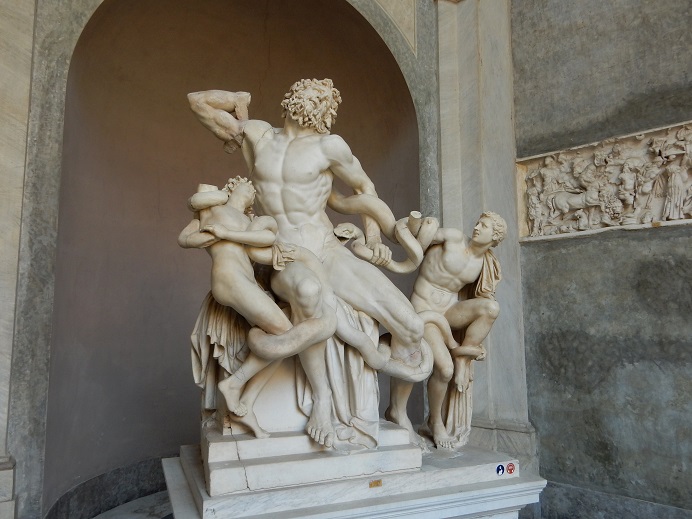 Along the base of the inside of the dome in St. Peter’s Basilica is an inscription in Latin of quotes from Jesus to Peter in the Bible. It translates to: “You are Peter, and on this rock, I will build my church, and the gates of the underworld can never overpower it. I will give you the keys to the kingdom of heaven.” (Matthew 16:18) 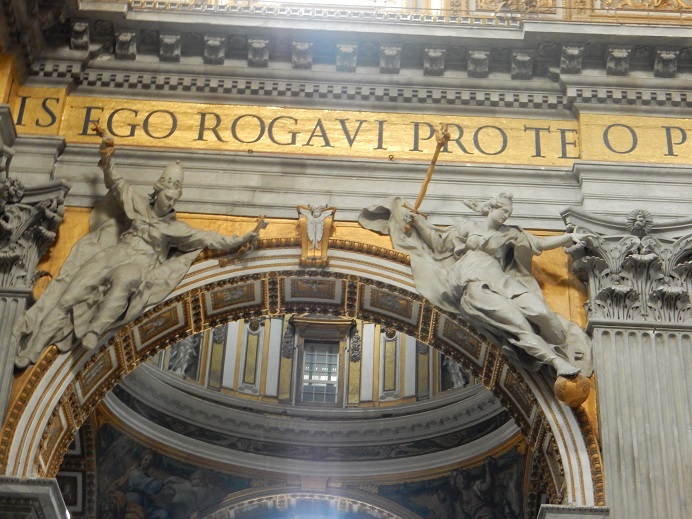 The bronze statue of St. Peter is seated on a marble throne. He’s blessing the faithful with his right hand. In his left hand, he holds the keys to the kingdom of heaven. It is a tradition for pilgrims, after they’ve prayed, to kiss or rub St. Peter’s right foot. Over the years, this has caused his right foot to be worn smooth. The toes on his left foot still have individual digits.

The entrance to the Confessio – a 17th-century sunken chapel – opens under the center of the dome and “is really the heart of the Basilica.” Its name is in reference to Peter’s confession of faith that led to his martyrdom. Under the papal alter in the Basilica is St. Peter’s tomb. This is where, in the movie, “Angels and Demons,” (2009) – based on Dan Brown’s book – the Camerlengo (Ewan McGregor) met his demise when he set himself on fire.

As we left, we saw the Papal Swiss Guards outside the Vatican.

Don’t be fooled by their colorful garb. These guys don’t play. When a visitor stepped inside an area that was off-limits, the guard strode menacingly toward the visitor, who quickly backed off and stood behind the barricade.

Is there an art collection or site that is part of your bucket list? Please add to the comments below.

Source: St. Peter’s – Guide to the Basilica and Square.   http://stpetersbasilica.info/Docs/Basilica-Square3.htm

Source: Sphere within a sphere. http://vatican.com/photos/gallery/the_sphere_within_a_sphere-p44

Next week, I will post photos from our visit to Venice.